Crossout Mobile
Controlacriongame.com is not an official representative or the developer of this application. Copyrighted materials belong to their respective owners. To download the app, you will get links to the Official Website and/or official digital markets.

Crossout is a free to play open world MMO game by Russian studio Targem Games published by Gaijin Entertainment in 2017. In the game, you have to play as a driver for one of four factions, such as Engineers, Lunatics, Nomads, Scavengers, and more. Your mission in every battle is to eliminate all enemy team vehicles in cooperation with your team members. You can download Crossout for your PlayStation 4 for free.

Crossout game is powered by the Hammer Engine that was created by Tagrem games for their previous successful franchise Star Conflict. That’s why the game looks unique and authentic. Developers designed the whole environment for the needs of their creation, so it looks and performs great on all platforms.

Crossout gameplay is focused on constructing scrap vehicles with heavy armor and guns for PvP and PvE battles. You have an opportunity to create various trucks using your imagination and hundreds of items from multiple categories. You are allowed to cut vehicles, weld various details even if they look incompatible, and hang various machine guns, cannons, spikes, and battering rams.

The action takes place in the post-apocalyptic setting. To have a better idea, imagine the world of Mad Max with genetic experiments on the human species that went wrong. This game is linked with the older game of the studio that was sold in the United States as Hard Truck: Apocalypse. You are offered to play in the same universe but 200 years before the original franchise.

Every faction in the Crossout MMO game uses specific types of vehicles. The four basic camps open access to the more technologically advanced groupings after you reach level 10. It means that you can progress from simple machine guns and slowly charging cannons to plasma guns, heavy explosives, and flamethrowers.

The test of controls for the Crossout review included comparing PC and PS4 versions. Both inputs are convenient for precise handling and shooting but have some drawbacks either. Using the keyboard, you can’t tune acceleration, while the gamepad layout lacks the accuracy of mouse aiming.

Crossout full game provides a single-player mode with a short story introduction and quick battles between you and Ai-driven enemies. The multiplayer is what makes the game worthy. You can play it forever, but all enemies always have unique vehicles and fighting power, so it’s never boring.

Crossout is a unique post-apocalyptic death-race with battering rams, spikes, genetic mutations, cannons, napalm, and unlimited engineering options. This MMO sandbox will bring you long hours of fun and WTF situations along with the balanced combat system and unique features of each clan. 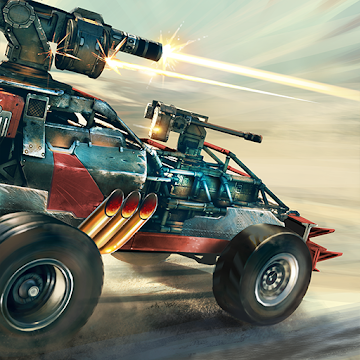 Crossout Mobile
49MB
Take a note. This app’s size is bigger than the average in this category