Soccer Stars
Controlacriongame.com is not an official representative or the developer of this application. Copyrighted materials belong to their respective owners. To download the app, you will get links to the Official Website and/or official digital markets.

Soccer Stars is a browser-based football simulator available on Gameroom social network Facebook. Many football fans love to play simulations of this sport. The latest version of Soccer Stars is an interesting online game that will reduce the time and get positive emotions from football confrontation with other players from different parts of the world. You do not need to buy and download Soccer Stars to play! This browser game is available from any computer device.

Graphic design in Soccer Stars does not seem very good at first sight. This game is made in 2D format, so some visual techniques are not available. On the playing field, there are chips replacing the players. Unfortunately, there is no full animation of the players in the game. You have to play with colorful chips, as if in billiards. The developers have worked hard on the animation. But this is not enough to cause admiration for the game graphics.

Each action in the game is accompanied by a voice. You will not hear the typical sounds for a real football match. For example, the sound of fans, shouts of football players, hitting a ball and other sounds are not available. Each blow to the ball is accompanied by cotton, which is little like real football. It is not surprising, because the developers created the game for temporary entertainment. This mini football simulator has very little resemblance to the real football game.

Soccer Stars' gameplay is very simple. Once the game is launched, an opponent is automatically selected for you among other Facebook users who are also waiting for an online match. The game is similar to checkers, where you need to play chips on the green field. The gameplay can be based on a strategic game or on stubbornness and attack. Spread the chips as you like before each match or purposefully attack each time you see an opponent. The main goal is to score the first two goals before your opponent. The game is interesting for users who prefer to create their own tactics and use non-standard methods in football.

Online game Soccer Stars is interesting only for the first few matches with other Facebook users. After that, the gameplay becomes linear and predictable. There are too few unique elements in the game. For example, you always play on only one location without changes. Soccer Stars simulator doesn't have much playback value.

Free Soccer Stars game is not a full-fledged football simulator and can not become an alternative to FIFA or PES. Play this game to get emotions, but no more than that. After a few hours, you won't want to launch Soccer Stars again, because of the linear gameplay and lack of originality. Perhaps, the developers will make additions and add new interesting elements to the game. But so far it is less interesting than any other football simulator. 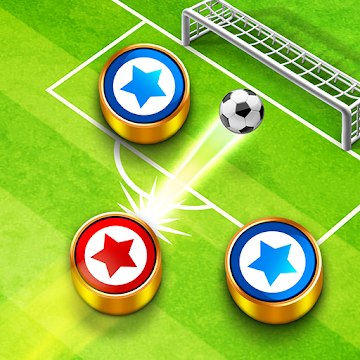 Soccer Stars
53MB
Take a note. This app’s size is bigger than the average in this category